By Sivaranjini Anandan on April 22, 2019 • ( Leave a comment )
Om Ganathipathayae Namaha. I start this devotional post with the blessings of Lord Ganesha. He is worshiped all over the world and believed to be the God of Good Beginnings.

However, the hero of our post is Arumuga Kadavul Murugan – A well known and most worshiped God in Tamil Nadu is known to be the younger son of Lord Siva and Parvathi and also the younger brother of viknaharatha Vinayaka. It is believed that he originated from the third eye of Lord Siva. Six babies originated by putting together all the powers of Lord Siva and then they were taken care of by krithikaas or stars also known as karthigai pengal in tamil. All those six kids were joint as one God with six faces by his mother Goddess Parvathi. He was known for his handsome looks that is why the  Tamil people call him as Azagan Murugan
– The lord of beauty and his vehicle is the peacock our national bird.

Once it happened that the demons or Asuras prisoned Devas and treated them cruelly as slaves. The Devas including Indira went to Lord Siva for help. Asuras namely Anamughan, Panumughan, Simhamughan, and Soorapadman were really difficult to defeat in the war as Soorapadman the leader of the Asuras had a wish granted by Lord Siva that no power other than the power of Lord Siva can defeat him in the world. He was a great devotee of Lord Siva but had the bad intention of destroying the world. Lord Siva gave the duty of making the devas free by defeating Asuras to his son Siva Muthu Kumaran-Murugan. Lord Murugan can be addressed as Skandan, Vetri Velan, Swaminathan, Senthil Andavan, Karthikeyan, Arumugan, Shanmugan, and Sivasubramaniyan and the list are endless. Lord Murugan is a lover of mountains and we can find his temples on top of the mountains. Among them, Palani is famous because he went and stood there when he was denied the sacred fruit.

Lord Murugan took charge as the army head of Gods and met the Asuras in the battlefield. He came as a new ray of hope to save the Devaas also known as inhabitants of heaven. He defeated the three Asuras who were brothers and son of soorabadhman. On the final day, Soorabadhman by putting all his powers together took a form of a tree. Lord Murugan defeated soorabadhman with a Sakthi vel(spear or Devine weapon) given to him by his mother Parvathi by which he separated soorabadhman who stood in the form of a tree into two halves. One half was converted into a rooster and another half into a flag and this is celebrated as the festival skanda Shasti marking the Soorasamharam. Indira Deva got his daughter Devasena married to Murugan to thank him for his noble efforts to win the war against the Asuras and set them free. 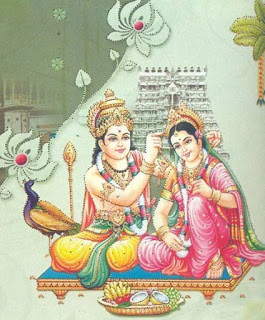 Lord Murugan is known for his perennial knowledge where he becomes a teacher and explains the meaning of Om the Pranava mantra or eternal truth of existence to his father Lord Siva.

He married Valli the daughter of Nambi Rajan the king of the Kuravar tribe. He married her for the kind of love and devotion she had towards him. The two wives symbolize the icchha Sakthi and kriya shakti meaning the power of will and power of action respectively. Asuras depict the bad intentions and greed of man that has to be defeated in order to free oneself from the materialistic bonds of the world and get salvation. Kaavadi aattam, paal Kudam, Alagu kuthuthal are different ways by which devotees show their devotion to the Lord during the seven-day festival known popularly in TamilNadu as Skanda Shasti. 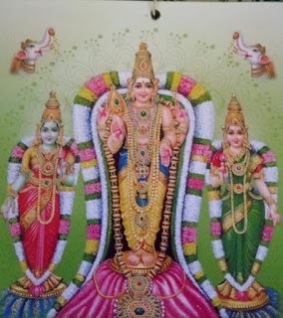